Now available on the C64 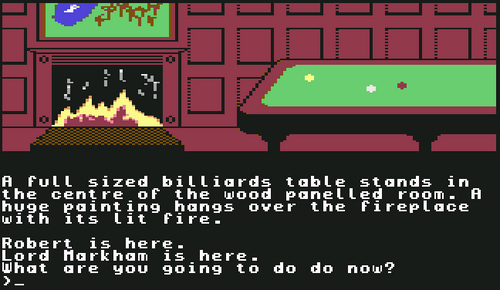 Due to some quiet time over Xmas it has been possible to convert the graphics from the Spectrum format release into Commodore Multicolour format and squash a couple of visual bugs. As a result, The Mystery of Markham Manor has now made it to the C64.

Due to limited disk space, I decided to forgo a loading screen in exchange for graphics at each location. The graphics load from disk which can cause a delay. The game is also made available in a text-only version for those who prefer to use their imaginations.

Thanks to the team behind DAAD ready for providing such a useable update to the original DAAD system and for their willingness to share it with the world. Also thanks to the original creator of DAAD Tim Gilberts and the owners of the product for releasing it.

Get The Mystery of Markham Manor

The Mystery of Markham Manor